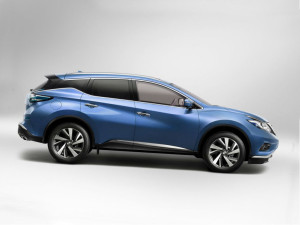 When Nissan introduced the production version of the third-generation Murano at the New York auto show this year, the crowds were somewhere between surprised and shocked that the undulatory exterior and wacky roof pillars of the concept hadn’t been dulled down in production trim the way most concepts are. The wavy forms down the side and the sloping roof were still there, no doubt terrifying the metal stamping machines at the beast’s Canton, Miss. production plant.

But that exterior contributes as much to the vehicle’s significant improvements as anything else. When it arrives in showrooms in December the Murano will be 130 pounds lighter, 20 percent more fuel efficient and its cd will have dropped by .06 to 0.31. All of those improvements are interrelated.

Nissan said it was able to lower the curb weight through design efficiencies and with the selective use of high-strength steel, particularly in areas beefed up for better side-impact protection. While no 2015 specifictions were released, if you knock off 130 pounds from the current Murano’s heft you get curb weights for the 2015 model that will range from 3693 to 4025 pounds. That’s less than V6-powered competitors like the Ford Edge and Toyota Venzabut a little more than four-cylinder competitors like the Hyundai Santa Fe and Ford Escape.

Turns out that sculpted exterior is functional, too. While the basic shape and proportions haven’t changed compared to the Resonance concept that debuted at the 2013 Detroit show, the surface of it has, up to an inch and a half here and there as needed for better laminar airflow. The new head- and taillights, as extreme as the rest of the shapes, help reduce drag, as well. The production model spent three times the number of hours in the wind tunnel compared to the 2014 Murano. That’s what it takes to get from 0.37 to 0.31 cd.

The standard Xtronic CVT transmission – the only one that will be offered – is more efficient, with reduced internal friction, Nissan says. As with the four-cylinder Altima and Rogue, the 2015 Murano CVT will get D-Step Shift logic to provide the illusion that it is a traditional automatic transmission. Faking shifts appears to reassure customers that there is nothing wrong with their trannies, and gives enthusiast drivers something to do going around corners. The D-Step shift algorithms come next to the Versa, Versa Note, Sentra, Altima V6, Pathfinder and Quest. It seems like there’s no going away from CVTs at Nissan.

All the above increases the 2015 Murano’s fuel economy from 20 EPA combined in the current vehicle to an estimated 24 in the coming ride.

That will be with virtually the same 260-hp, 240-lb-ft 3.5-liter V6 engine as before. That front- or all wheel-drive powertrain will provide 0-60 acceleration “in the sixes,” according to Nissan, though specific times have not been released.

“This is for the older empty nester couple and their friends,” explained senior product planning manager Scott Pak.

The Rogue is for young couples with one kid, the Pathfinder’s for families with two children, and when the kids finally leave the parents get a Murano.  The lounge aspect of that interior will be centered on what Nissan calls its “zero-gravity” seats. These feature three layers of urethane, grippy side bolsters and three (as opposed to the normal two) points of contact and support for your kiester. The front seats can be ordered as climate controlled meaning heating and cooling is

What used to be known as the instrument cluster but which is now known as the “drive assist display” is a seven-inch reconfigurable full-color screen. Over on the center console is an eight-inch capacity touch NAV display that helps reduce the number of so-called hard buttons from 25 to 10. It includes the popular pinch and swipe gestures that the kids love so much on their phones.

Safety features include: blind spot warning, cross-traffic alert, moving object detection, forward emergency braking and forward collision warning. Lane departure warning was not included in the new Murano’s options because Nissan said customers were not wanting it as much. (That’s corporatespeak for, “It drove people crazy!”)

Behind the second row of seats there is 7.8 more cubic feet of cargo space, a huge leap in capacity, especially considering that the new Murano is only 2.5 inches longer than the current one.

So that’s what we learned after we spent a day at Nissan’s Arizona proving grounds with a production prototype. Okay, we learned more than that but we can’t tell you. Driving impressions are under embargo till sometime around December. So despite having negotiated the high-speed oval, various rough-road surfaces and the really fun road course with whoop-dee-doos, expansion joints, frost heaves and manhole covers scattered at all the apexes, we can’t tell you whether the coming Murano crossover is really fun to drive or whether it blows. Sorry.

Look for more info in a few months.