The 2015 Nissan Lineup: Charting the Changes 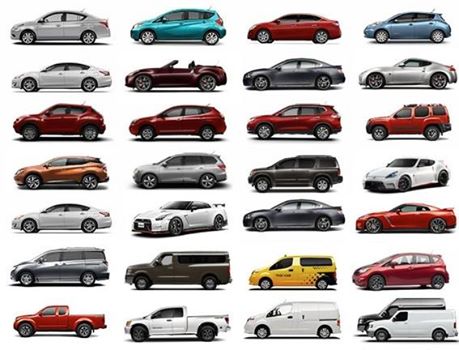 Headlining the changes for 2015 is the upcoming launch of the all-new Nissan Murano (due in late 2014).

There are also a number of significant enhancements to other Nissan cars, SUVs and trucks for 2015, including:

Following is a top-line overview of the 2015 changes, followed by more complete “Fast Facts” product information. As always, stay tuned to NissanNews.com for the latest updates on Nissan products, pricing and other activities in the United States and around the world.

Now in the third model year of the fifth-generation design, Nissan Altima continues as one of the nation’s top-selling vehicles – embraced by owners for its premium exterior and interior designs, rewarding driving experience and innovative, driver-focused technology. Altima also offers efficient 38 miles-per-gallon highway fuel economy (2.5-liter engine) and an array of seven high-value available models that meet a range of customer needs and budgets.

For 2015, the major enhancements include:

Now in its fifth year of production, the 2015 Nissan LEAF continues to surprise first-time buyers with its ease of ownership – offering the space and range to meet most drivers’ everyday needs, while also providing an exceptional value proposition due to zero spending on gas, lower maintenance costs and Federal and State tax incentives.

Already the best-selling 100-percent electric vehicle in the world, Nissan LEAF’s popularity and sales continue to soar as more and more people discover its quiet and fun driving experience.

Nissan Maxima
The 2014 Maxima sedan will see an extended model year and continue to be available into 2015.

2015 Nissan Sentra
The seventh-generation Nissan Sentra, introduced in fall 2012, continues to be refined for the 2015 model year with a number of interior comfort and convenience enhancements, including standard USB connection port and Bluetooth® Hands-free Phone System on all models.  In addition, leather-appointed seats and heated front seats are standard on Sentra SL, and rear disc brakes are now standard on Sentra SR and SL grades.

Following the introduction of an all-new Versa Note hatchback for the 2014 model year, the Versa Sedan receives an extensive makeover for 2015 – including new front and rear fascias, a range of interior refinements and new packaging content. Most prominent of the changes to the 2015 Versa Sedan is the bold new front-end treatment anchored by larger headlights, a more substantial looking fascia and standard chrome plating on the grille – all of which bring the vehicle closer in look to the Nissan Sentra, Altima and Maxima sedans.

Following a highly successful debut as a 2014 model, the Nissan Versa Note enters its second year of production with a number of significant enhancements – led by the addition of new Versa Note SR and Versa Note SL trim levels. There are now a total of five models: S, S Plus, SV, SR and SL.

The big news for the 2015 is the addition of the Nissan GT-R NISMO, the fastest Nissan GT-R ever built and holder of the volume production car lap record (7:08.679) at the famed Nürburgring racetrack in Germany. The new Nissan GT-R NISMO features an advanced 3.8-liter twin turbo V6 engine rated at 600 horsepower and 481 lb-ft of torque* – increases of 55 horsepower and 18 lb-ft of torque versus standard 2015 GT-R models – along with enhanced aerodynamics, body reinforcement and ultra-precise handling thanks to a variety of suspension refinements.

It has numerous motorsports-inspired technologies to enhance the car’s performance through optimized aerodynamics, suspension and powertrain, creating a well-balanced machine that is at home on both the road and track**.

The GT-R NISMO joins the current 2015 GT-R models that are already on sale: GT-R Premium and GT-R Black Edition. These models all receive a range of important enhancements for the new model year – giving GT-R a more refined look and feel, without sacrificing one bit of its legendary performance.

2015 Nissan 370Z Coupe
The 2015 Nissan 370Z continues to offer extraordinary performance design and an unmatched heritage as one of the most iconic sports cars in automotive history. Two new trim levels are offered for 2015: Sport and Sport Tech. In addition, significant changes have been made to the top-of-the-line 370Z NISMO (see below), including the first-ever available automatic transmission (in addition to the 6-speed manual).

2015 Nissan 370Z NISMO
The most striking change for the 2015 370Z NISMO is its revised exterior design. Its GT-R-inspired functional and fully integrated aerodynamic body pieces have been redesigned to provide an aggressive and more aerodynamic new appearance – as well as optimizing front and rear downforce.

As in previous years, the 2015 370Z NISMO is powered by a potent 350-horsepower 3.7-liter DOHC V6 engine with Variable Valve Event and Lift Control (VVEL). The engine is matched with an exclusive, tuned H-configured exhaust system design, muffler tuning and an optimized calibration is installed to help create 18 horsepower more than a standard 370Z Coupe. Torque is rated at 276 lb-ft.

2015 Nissan JUKE
Global introduced at the Geneva Motor Show in 2014, the 2015 JUKE gets even bolder, with new styling and available features.  More information will be available on 2015 JUKE closer to its on-sale date in late 2014.

The Nissan Murano has always stood out from ordinary crossovers with its refined yet daring and futuristic design. With the introduction of the new third-generation design, Murano kicks it up many notches with its concept car-like styling, premium interior and advanced, purposeful technology.

The breakthrough exterior design carries into the interior, which offers an engaging social lounge feel through features such as the refined instrument panel, wide center console, advanced NASA-inspired Zero Gravity front and outboard rear seating, and the airy atmosphere created by the large windows and available oversized Power Panoramic Moonroof.

Responsive driving is provided by a standard 3.5-liter DOHC V6 connected to an advanced Xtronic transmission. Murano is available in front-wheel drive or Intuitive All-Wheel Drive.

The 2015 Murano is set for a late-2014 arrival at Nissan dealers nationwide.

2015 Nissan Rogue
The Nissan Rogue, which was completely redesigned for the 2014 model year, challenges convention once again with bold emotive styling, a premium interior created with comfort and multi-tasking in mind, and an array of available affordable technologies. Rogue offers optional 3-row/7-passenger seating, along with exceptional passenger and cargo flexibility with its innovative EZ Flex™ seating System and innovative Divide-N-Hide™ Cargo System.

Every 2015 Nissan Rogue is equipped with a responsive 2.5-liter 4-cylinder engine rated at 170 horsepower and 175 lb-ft of torque. The engine is matched with an advanced Xtronic transmission. Rogue comes in three well-equipped models, S, SV and SL, each in a choice of front-wheel or all-wheel drive.

2015 Nissan Rogue Select
With the popular Nissan Rogue totally redesigned for 2014 with more features and amenities, Nissan continues to offer a simplified lineup of the previous generation Rogue under the Rogue Select nameplate. Designed to appeal to more price-sensitive buyers, it is available in just one trim level – Rogue Select S – in a choice of front-wheel drive or all-wheel drive.

2015 Nissan Frontier
Nissan Frontier continues to be a leader in the mid-size truck segment, combining premium hardware, extraordinary power and an exceptional level of on- and off-road performance.

2015 Nissan Titan
The powerful full-size 2015 Nissan Titan continues to offer a unique combination of style, innovation and excellent value – including a range of body, bed and drivetrain configurations designed to fit a variety of buyer needs from a durable business tool to a versatile family adventurer. For 2015, Titan is again offered in King Cab and Crew Cab body styles with a choice of 4×4 and 4×2 drive configurations and two bed lengths. Titan is available in four well-equipped models – S, SV, PRO-4X and SL.

Titan is built on Nissan’s rugged F-Alpha pickup platform, featuring a powerful 5.6-liter DOHC Endurance V8 rated at 317 horsepower and 385 lb-ft of torque. Titan offers a standard 5-speed automatic transmission and a maximum towing capacity of up to 9,500 pounds for King Cab and 9,400 pounds for Crew Cab (when properly equipped).

Nissan Commercial Vehicles started business in the United States in spring 2011 after operating in Japan and globally since 1935. The lineup now includes the NV Cargo, the NV Passenger, NV200 Compact Cargo and NV200 Taxi.

2015 Nissan NV Passenger
The 4-row/12-passenger Nissan NV3500 HD Passenger Van is offered for both personal and fleet use. It features the most flexible seating configurations in the full-size passenger van segment, along with roof-mounted curtain supplemental air bags for side-impact and rollover head protection for all outboard passengers, and standard headrests and integrated seat belts for all rear seating positions.

2015 Nissan NV200 Taxi
The Nissan NV200 Taxi is the product of a unique development collaboration. It reflects the input of hundreds of taxi owners and drivers, and thousands of passengers from all walks of life.

Following is a “Fast Facts” overview of Nissan products for the 2015 model year:

*Charging times and range estimates may vary depending on driving/charging habits, weather, temperature and battery age. 6.6kW onboard charger is a standard feature on SV and SL trims. It is an optional feature on the S trim

About Nissan North America
In North America, Nissan’s operations include automotive styling, engineering, consumer and corporate financing, sales and marketing, distribution and manufacturing. Nissan is dedicated to improving the environment under the Nissan Green Program and has been recognized as an ENERGY STAR® Partner of the Year in 2010, 2011, 2012, 2013 and 2014 by the U.S Environmental Protection Agency. More information on Nissan in North America and the complete line of Nissan and Infiniti vehicles can be found online at www.NissanUSA.comand www.InfinitiUSA.com, or visit the Americas media sites NissanNews.com andInfinitiNews.com.

About Nissan
Nissan Motor Co., Ltd., Japan’s second-largest automotive company, is headquartered in Yokohama, Japan, and is part of the Renault-Nissan Alliance. Operating with more than 236,000 employees globally, Nissan sold more than 4.9 million vehicles and generated revenue of 9.6 trillion yen (USD 116.16 billion) in fiscal 2012. Nissan delivers a comprehensive range of over 60 models under the Nissan and Infiniti brands. In 2010, Nissan introduced the Nissan LEAF, and continues to lead in zero-emission mobility. The LEAF, the first mass-market, pure-electric vehicle launched globally, is now the best-selling EV in history.

For more information on our products, services and commitment to sustainable mobility, visit our website at http://www.nissan-global.com/EN/.

0 comment(s) so far on The 2015 Nissan Lineup: Charting the Changes